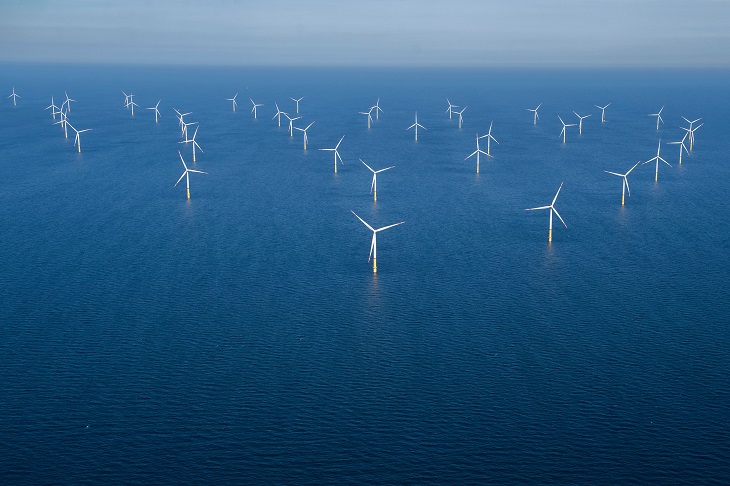 A humpback whale carcass recently washed up on the beach at Brigantine near Atlantic City, sparking concern over the preliminary work being done for huge offshore wind farms. It was the seventh inconvenient dead whale in a month around the New Jersey and New York areas. While whales do wash up from time to time, seven in a short period has caused concern.

Environmental groups, no doubt panicked about their two favourite projects potentially murdering each other, have stepped up and said concerns regarding the wind farm construction are ‘unfounded and premature’.

Meanwhile, the Marine Mammal Stranding Centre at Brigantine is carrying out a postmortem on the remains. While it was noted that some of the whales looked as though they had been hit by vessels, it is unclear whether their external injuries happened before or after death.

Political panic about the ‘climate crisis’ is routinely used as a justification for corporate behaviour that would otherwise be scorned. An environmental group in New Jersey went so far as to say:

‘The climate crisis demands that we quickly develop renewable energy, and offshore wind is critically important for New Jersey to reach the state’s economic development and environmental justice goals.’

Wind farms (and whatever critical damage they may cause to marine environments around the world) are considered excusable because they are marketed as the only way to avert planetary catastrophe – which is not true. Nuclear energy has long been recognised as a better solution, environmentally speaking.

What is often forgotten about wind turbines is that they are essentially steel skyscrapers, fitted with blades, and affixed to the ocean floor (which is damaged in the process). These ‘cities’ are encroaching on the ocean and carpeting the shoreline, creating constant noise pollution in a sensitive environment full of creatures that use sound to survive.

The end result is a matrix of spinning blades on the surface of the water, disrupting air patterns and massacring marine bird life. Studies on bird behaviour came to the conclusion that wind farms represent lost territory, with many birds choosing to abandon the area entirely. As for how large wind turbines are getting, the tallest offshore wind turbine is GE’s Haliade-X standing at 260 metres – or roughly a 70-storey building.

A group of residents around the New Jersey site where the whales keep washing up have demanded a federal investigation into the deaths which are suspected to be linked to ocean floor scouting activity.

‘The Clean Ocean Action environmental group said such site work typically involves exploring the ocean floor using focused pulses of low-frequency sound in the same frequency that whales hear and communicate, which could potentially harm or disorient the animals.’

‘At a news conference Monday in Atlantic City, the groups calling on Biden to probe the deaths said offshore wind developers have applied for authorisation to harass or harm as many as 157,000 marine mammals off the two states.

‘NOAA (National Oceanic and Atmospheric Administration) said 11 such applications are active in the area but involve non-serious injuries and harassment of marine animals, not killing them.

‘“NOAA Fisheries has not authorised, or proposed to authorise, mortality or serious injury for any wind-related action,” agency spokesperson Lauren Gaches said.’

It’s not much of a leap to look toward the wind farms as a possible cause of whale deaths. There have been many studies, particularly in Europe related to North Sea wind farms, about the impact that these forests of steel have on marine life.

In 2017, three minke whales washed up on the UK coast, apparently distressed by the offshore wind farm. It was argued that the sonar communication between the whales was being confused by the turbines.

The report also warned that the noise related to pole-driving for wind turbine bases could result in permanent hearing damage to various whale species and beaching events. Whales are known to be able to detect the operational noises of wind farms over very large distances. With the oceans filling up with wind farms, humans could be driving marine life insane – like trying to live in an apartment underneath a noisy neighbour.

A 2021 study into Taiwan’s ‘Thousand wind turbines project’ in the Taiwan Strait says:

‘The offshore wind farm life-cycle includes planning, construction, installation, operation maintenance, and decommissioning. The noise and vibrations generated by offshore wind turbines during the construction and operation phase have recently been found to negatively impact hearing sensitivity and cause behavioural changes in numerous marine organisms even at ranges many kilometres distance from the wind farm.’

While the noise is most extreme during the construction phase, the operational continuous low-frequency noise irritates marine life. In particular, this study warned about the danger posed to chorusing fish who may struggle to attract mates, spawn, communicate, or function under such condition resulting in ‘cascade effects on behavioural and ecological processes’.

Offshore wind farms have a similar problem to their onshore cousins, with residents and farm animals living near turbines complaining about low-frequency noises that eventually drive people crazy.

A recent case against a wind farm in Victoria was settled in favour of residents who complained about not being able to sleep due to noise from a nearby wind farm. A 2021 study, Effects of low-frequency noise from wind turbines on heart rate variability in healthy individuals, said that low frequency exposure ‘has been found to cause a variety of health conditions’ and that ‘exposure to LFN from wind turbines results in headaches, difficulty concentrating, irritability, fatigue, dizziness, tinnitus, aural pain, sleep disturbances, and annoyance’ while it also ‘may cause increased risk of epilepsy, cardiovascular effects, and coronary artery disease’.

In order to ‘save the planet’, environmental movements are in danger of making it less livable. At the very least, we should stop allowing Net Zero and renewables industries to use the threat of apocalypse to justify damage to the environment. This ‘for the greater good’ mentality might very well destroy our oceans.