Sky News has visited the Market Street Health Centre where NHS staff play a crucial role in the detection of monkeypox infections – with the majority of cases in England from the gay and bisexual community.

Why you can trust Sky News

Lindsay McCarthy shows me an empty examination room. The space has been set aside for suspected cases of monkeypox.

Patients who might have the virus can be seen here to minimise the risk of spreading the infection to other patients and staff at the Market Street Health Centre, part of the Oxleas NHS Foundation Trust in southeast London, where she works as the lead nurse.

The virus spreads through close physical contact so staff here are being “fit tested” – measured for enhanced personal protective equipment.

“Should anyone come through into the clinic that requires a skin check we have identified an isolation room,” she says.

“Our staff are all being fit tested for their masks and wearing full PPE so we would keep my staff safe and other members of the public safe that come in.”

Sexual health clinics like this one will play a crucial role in the early detection of monkeypox cases.

The virus is not a sexually transmitted infection (STI) but it is spread by close physical contact. It can also live on surfaces like bedsheets or towels. Anyone can become infected.

“So we’re looking for any rashes that people might have that are unusual to them, an ulceration, could be anywhere on the body but in this instance we would perhaps be looking for anything in the genital area. It could be mistaken for herpes, which is very prominent, so we’d probably get quite a lot of calls about that,” she adds.

The majority of the cases detected in England are from the gay and bisexual community and among men who have sex with men (MSM).

Stephen Hart is a YouTuber and radio host. He is using his social media channels to address rising anxiety in this community. He tells me he has had many messages from gay men who are concerned about the rise in cases.

“People have been getting in touch because they’re anxious. Because there’s been the news reports, there’s been a number of people contacting us saying ‘what if’ and ‘what’s the risk of me getting it’ and ‘I’m scared that it’s another MSM thing or gay and bisexual men in the news’ because obviously that’s a trigger for a lot of people.

“Because that’s what a lot of people went through with the Aids crisis, gay and bisexual men so it’s definitely out there in conversations and there are people who have been in touch who are anxious about it.”

Read more:
Monkeypox: How do you catch it, what are the symptoms, and how easily does it spread?
Monkeypox rare in children and parents ‘should not be worried’ about rise in UK cases, say experts
US is looking into monkeypox treatments and vaccines, says President Joe Biden

Public health messaging has to balance raising awareness without stigmatising the community. And this, says Stephen, is also adding to the anxiety.

He tells me: “There’s a number of different things, and again I think people are worried, the gay and bisexual men that have contacted me are worried because they feel they’ve been named, they’re being put out there.

“So it’s about people knowing that it’s not a virus that’s only going to get gay and bisexual men, it’s just that’s what’s happened so far.”

Gay and bisexual men are well practised at noticing changes in their health and officials have credited this community with the early detection of infections.

Mr Hart agrees: “It’s instilled into us now that sexual health, how to look after our own sexual health and how easy it is now.”

Monkeypox was first detected in west and central Africa in the 1970s. And outbreaks outside the continent are rare.

Please use Chrome browser for a more accessible video player 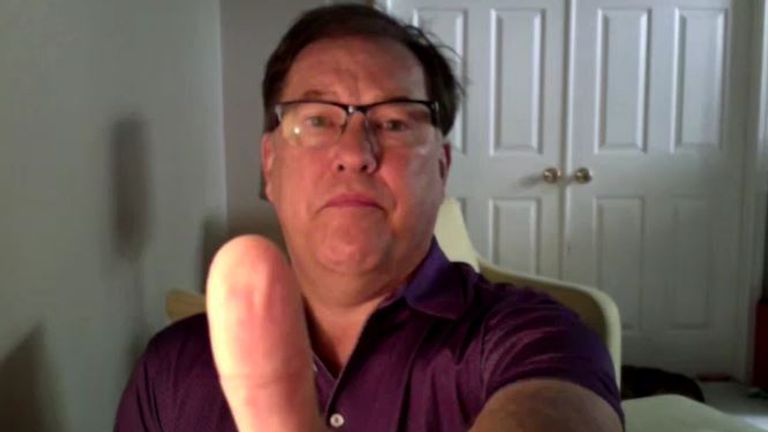 Scientists are still trying to understand what is driving this surge in cases worldwide.

The government has procured over 20,000 doses of a small pox vaccine as part of its rapid response to monkeypox.

Like Mrs McCarthy and her colleagues at Market Street Health Clinic, it hopes the outbreak can be contained but it is making sure it is prepared just in case.