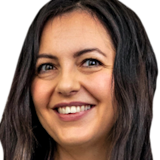 If there were such a diktat, the Waleses (minus four-year-old Louis who stayed home) followed it to the letter. Arriving hand in hand, they were immaculately coordinated: Catherine in a custom Eponine coat-dress was close in colour to Charlotte’s Peter Pan collar coat and her husband’s tie. William and George wore matching navy coats over their suits. You have to hand it to them, they know how to create a photo op.

But it didn’t stop there. Zara Tindall also attended in a claret coat, and as with the Waleses, Mike matched her with a tie in the same hue. Then there was Kate’s sister Pippa Matthews, clad in a £409 belted Karen Millen number, her husband James in a complementary pink tie. This is surely too much matchy-matchy dressing to rule out a coincidence. Either way, they are on trend: this hue (more of a claret than a burgundy actually) is akin to Viva Magenta, Pantone’s colour of the year for 2023.

Those who weren’t in claret had coordinated, too. The Queen Consort, the Countess of Wessex and Princess Beatrice all wore shades of cream. Princess Eugenie (in Weekend Max Mara) and Princess Michael of Kent opted for chocolate brown. Whoever is orchestrating this has elegant taste.

It sends a powerful message, too. Some might dismiss this family uniform as a bit naff, but we know the royals regularly employ the power of literal dressing, and this united front in coordinating colours is about as literal as it gets. There has been no official comment on the allegations made by the Duke and Duchess of Sussex in the latest episodes of their Netflix documentary, but this is the sartorial equivalent of saying: “We are a family, and we’re getting on with the day job – and we’re not going to dignify that nonsense by offering a response.”

No doubt they have more to say than that – but this matchy-matchy outing is as close as we’re going to get.