Orban’s Fidesz party strengthened their position in Parliament despite forecasts predicting a tight race. It won 53% of the vote with almost all ballots counted, enough for a commanding lead over a united coalition of opposition parties.

The election campaign was dominated by Moscow’s invasion of Ukraine, which put Orban’s lengthy association with Russian President Vladimir Putin under scrutiny. In his victory speech, Orban called Ukraine’s President Volodymyr Zelensky one of the “opponents” he had to overcome during the campaign.

Hungary is heavily reliant on Russian energy and Orban has dodged opportunities to condemn Putin’s assault on its neighboring state, complicating the EU’s efforts to present a united front against him. Putin congratulated Orban on his victory, a Kremlin spokesperson said Monday, adding: “Despite the difficult international situation, the further development of bilateral partnership fully meets the interests of Russia and Hungary.”

Orban faced a more organized opposition campaign than in previous polls, but his Fidesz party nonetheless won comfortably across much of the country. Opposition leader Peter Marki-Zay even failed to win in his own district, where he had served as mayor.

Pro-Putin leaders win two elections in Europe, reminding the Kremlin it has friends in high places

“We will remember this victory until the end of our lives because we had to fight against a huge amount of opponents,” Orban said, citing a number of his political enemies including the Hungarian left, “bureaucrats” in Brussels, the international media, “and the Ukrainian president too — we never had so many opponents at the same time.”

The results indicate that Fidesz will hold 135 seats in Hungary’s 199-seat parliament, meaning Orban would retain a two-thirds majority that will allow him to enact further changes to Hungary’s constitution.

The far-right, anti-vaccine party Our Homeland also made it to Parliament, winning seven seats in a strong showing.

But Orban did not have a perfect night; a controversial referendum on banning educational materials and programs for children that are considered to promote homosexuality and gender reassignment — seen by critics as an attempt to demonize Hungary’s LGBTQ community — failed to attract enough votes to be considered valid.

A thorny relationship with the EU

Orban has gained close control of Hungary’s judiciary, media and education institutions during his 12-year stint in power, which is now set to be extended until 2026. He has pushed legislation targeting migrants and the LGBTQ+ community, and has spoken of his intention to build an “illiberal” state within the EU.

Critics have long complained that he has tilted the political playing field against his opponents. Last month, Europe’s Office for Democratic Institutions and Human Rights (OSCE), recommended a full-scale international monitoring operation of the April 3 poll — a rare move for an EU state — after assessing claims of “a general deterioration of the conditions for democratic elections.”

But after a crushing victory on Sunday, Hungary is unlikely to revert from its collision course with Brussels leadership.

“The whole world could see this evening in Budapest that the Christian Democrat politics, the conservative politics and the nationalistic politics won,” Orban said on Sunday night. “Our message to Europe is that it’s not the past but the future. This will be our common European future.” 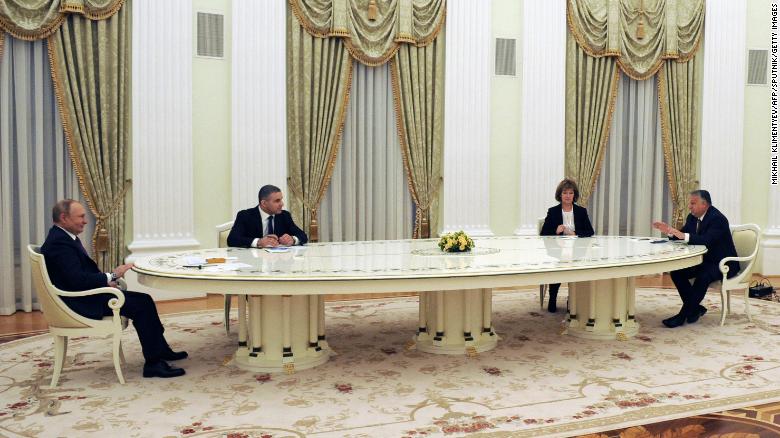 Since Russia’s invasion of Ukraine, Orban campaigned primarily on a platform of keeping Hungary’s troops and weapons out of the conflict. He has supported most of the EU’s sanctions against Russia since it invaded Ukraine, but has resisted going further and pitched himself as a peacemaker to voters.

The opposition criticized him for his stance. “Putin is rebuilding the Soviet empire and Orban is just watching it with strategic calm,” opposition leader Marki-Zay said at a rally in March, Reuters reported.

But Marki-Zay conceded defeat late on Sunday, telling supporters: “We don’t debate the victory of Fidesz, but we debate that this election was democratic and even.

“We will stay in this country, stand up for each other, hold hands and won’t let each other go. Hard times are coming, regardless of the election results. We know that they will blame us, we will be the scapegoats, so it’s more important than ever to hold each other’s hand and not let go.”

Even before the invasion, Orban had a thorny relationship with the EU. His government has been lambasted by senior figures in the bloc over rule of law issues; earlier this year, Europe’s top court allowed the EU to block funding to Hungary and Poland for violating democratic rights.

Crusading against Western liberal values has also formed a centerpiece of Orban’s premiership, and a referendum was also held Sunday on his controversial law that bans educational materials and programs for children that are considered to promote homosexuality and gender reassignment.

LGBTQ rights groups encouraged voters to spoil their ballots, in order to prevent it from reaching the threshold of required to be considered valid. The tactic appeared to have worked; while those who responded sided mostly with the government, only 3.5 million valid votes were cast, short of the 4.1 million needed to validate the referendum.

But Orban’s law, which he frames as a “child protection” measure, is already in place and the ballot was seen as symbolic. Orban previously framed a 2016 referendum on migrant quotas as a victory even though it was similarly invalid, and human rights groups fear he will use the results of this ballot to further target the LGBTQ community.

Comment by Nelle A strong leader who stands for right old values and traditions, in fact God’s commandments – sadly lacking in the West but I believe prominent in Russia